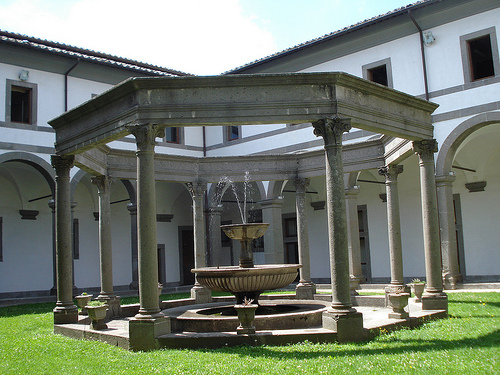 The choice of Viterbo as the seat of the University of Tuscia symbolizes the direct link between the history and cultural traditions of the city, and partly  the history of the complex of S. Maria in Gradi. In fact, itinerant studies existed in Viterbo since the mid-thirteenth century, where the disciplines of the trivium (grammar, rhetoric, and logic) and quadrivium (geometry, arithmetic, music, and astronomy) were taught.

In 1546, a “Studium” was founded based on the request of Pope Paul III Farnese. This “Studium”, which established the chairs of logic, philosophy, law, and medicine, was based in the Palazzo dei Priori and operated, albeit brief interruptions, until 1581. Later, in the early nineteenth century, a university-level Medical Surgical School was established in Viterbo which also included a chair in physics and chemistry.

The University clinic, which was located near l’Ospedale Grande degli Infermi (the Great Hospital of the Sick) operated until 1853, when it was terminated following the papal law “Quod divina sapientia” of Leo XIII who reorganized the studies of the Papal State. More recently, in 1969, the Free University of Tuscia was established, with the Faculties of Magisterium, Economics and Commerce, and Political Sciences, and terminated in 1979. The repeated attempts of the citizens to make Viterbo the seat of the University achieved success with the creation of l’Università Statale degli Studi della Tuscia (the State University of Tuscia), established by law no. 122 of April 3, 1979.

The University of Tuscia, founded in Viterbo in 1979, has rapidly developed to become a reference place for education and learning, offering courses that focus on topics relevant to the territory and to real-world problems.

The educational activities are managed by six Departments offering 18 Bachelor’s degree courses, 19 Master of Science degree courses and 2 single-cycle Master’s degree courses (lasting five years). The University of Tuscia also offers seven Doctoral research (PhD) programmes with specialization in all fields of research in domains such as Physical Sciences and Engineering, Life Sciences, and Social Sciences and Humanities. The University also foresees an education and training partnership with the Italian Armed Forces, which will be carried out in private partnership with the Army and the Italian Air Force. All degree programs are built in line with the European standards for quality assurance in order to satisfy the needs of the national and international job markets.

The University activities take place in four headquarters in the city of Viterbo, resulting from the synergy with local institutions: three of them, located in the historic center, are due to impressive restoration projects of the Church of San Carlo, of Santa Maria del Paradiso and the Dominican Convent of Santa Maria in Gradi, which houses the Rectorate and administrative offices; the fourth is located in the town of Riello. In addition, The University of Tuscia’s headquarters include two branch offices in Civitavecchia (RM) and Rieti (RI).

Teaching and research activities can also make use of excellent facilities, including the Botanical Garden, the “N.Lupori” experimental-educational farm, the Marine Experimental Ichthyogenic Center, the Large Facilities Center (CGA), the University Museum System, the Alpine Study Center (CSALP), and the University Library System.

The University of Tuscia is attentive to the student needs in and out of the classroom and is committed to supporting their entire educational path through guidance, tutoring, and job placement counseling. The small size of the University’s community facilitates closer relationships between students and teachers, and allows convenient access to all facilities and services, making the University a pulsating center of culture and student activities.