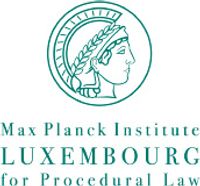 The Max Planck Institute (MPI) Luxembourg for Procedural Law is a dynamic research institution undertaking interdisciplinary and collaborative research in the fields of international, European and comparative, as well as regulatory procedural law. It is one of the five Max Planck Institutes outside the German borders, and the first one focussing on legal matters. It owes its existence to the Grand Duchy of Luxembourg which finances the Institute entirely, as a part of a broader strategy of the local government to develop Luxembourg as a centre for academic excellence and higher education.

Since its inception in 2012, the Institute has developed its unique focus on a challenging field of legal research, namely the procedures underlying dispute settlement and decision-making processes, with the aim of identifying and analysing emerging trends in dispute resolution and decision-making across Europe and globally.

Along the years, the MPI Luxembourg has established a continuous and productive dialogue with European and international courts and institutions. A close cooperation in research and teaching also exists with the faculty of law of the University of Luxembourg. It organises lecture series, international conferences, and summer academies. It has become a global hub for researchers specialising in all forms of dispute resolution.

The Institute is structured around two Research Departments and an International Doctoral Research School on Successful Dispute Resolution.